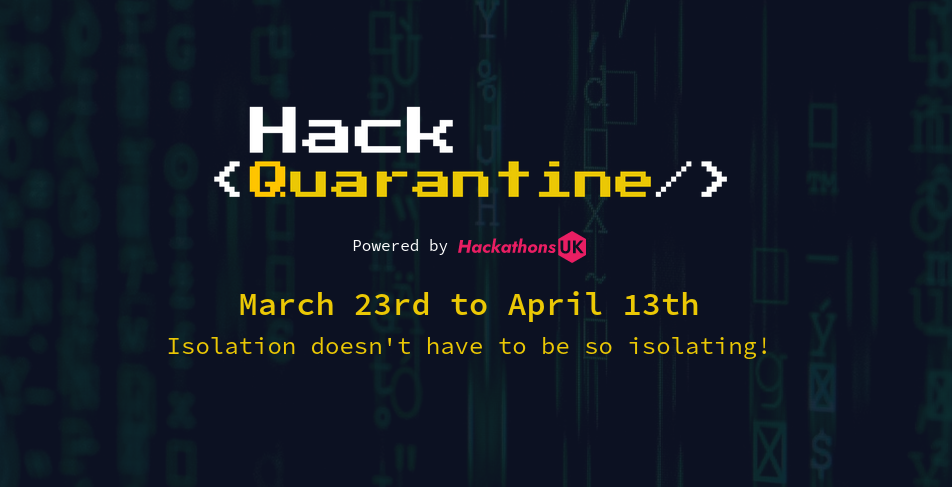 Back in March, term had just ended and I was spending time with some friends, enjoying the brief respite from work as well as wondering what the next few months would hold - the lockdown was just about showing signs of beginning. I received a message out of the blue from Will Russell telling me they had decided to run an online hackathon and asking if I wanted to get involved. What followed was an unforgettable few weeks - in only 10 days a team of 20 members of the hackathon community organised an entire 3-week-long hackathon, including a livestream with over 30 live workshops and talks, a website and online platform for participants to find teammates and communicate, and a moderated discord server with around 3000 members.

Upon joining the team I was added to a Slack workspace with the rest of the organisers and sent a link to a Google Meet call - we ended up conducting most of our meetings over Meet, with the call pretty much constantly active during the hackathon and its preparation. Despite having a fairly decentralised organisational hierarchy the planning ended up being fairly efficient - everyone on the team was passionate about the event’s success and quickly found their niche. We had people designing the website, finding sponsors and workshop hosts, reaching out to local leaders within the hacker community, designing graphics, writing press releases, and much much more.

I found myself picking up work on the website (which you can check out here) as well as doing various jobs on the livestream infrastructure side of things. Since the livestream was running 24/7 for the entire 3 week event, we needed a pretty robust streaming solution, which was headed up by Jon Kingsley. I ended up doing some work on the stream infrastructure as well as designing the entirety of the stream overlays, using a wonderful package called NodeCG. This package lets you design overlays as web pages which can then be controlled using a dashboard interface. Using this package allowed us to set up an aesthetically pleasing holding page with a live countdown to the next event, as well as an overlay during live events with information on upcoming events. We also had popups for live announcements and to indicate the music currently playing. All of this could be controlled from the NodeCG dashboard, and a good amount of it would update itself on the fly - the calendar hooked into Google’s calendar API to pull the upcoming events, and the “now playing” overlay grabbed data from Last.fm’s API. All of it was carefully designed to look pretty and minimise work for the stream operator. You can check out the repo for the overlay (and potentially adapt it for your own event) here!

All the talks and workshops were recorded, and you can check them out on our Youtube channel. We ended up inspiring almost 2000 members of the hacker community to create a project - you can check out all the submitted projects and see the winners on Devpost.

Hack Quarantine was an amazing experience and through it I met some truly amazing people. I’m looking forward to seeing what else comes out of the hacker community in the coming months and years!